Hey! My name is Matt, and I'm a Junior Political Science major from East Meadow, NY. By now, news has probably traveled around that Hofstra will be holding its third consecutive presidential debate! Here on campus, you’d be hard pressed to go anywhere and not see a sign or hear something about it. To go along with that excitement, Hofstra has organized a number of events which will ultimately build up to the debate on September 26th. The events I have been able to attend have featured not only experts on the presidency, but also former governors and even White House staffers. 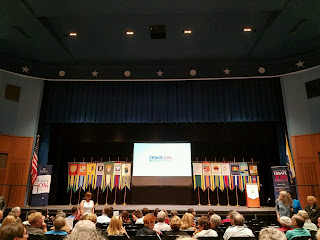 One of the first events I was able to attend featured David Axelrod. Axelrod currently serves as a senior political commentator for CNN and was a former chief strategist and senior advisor to President Obama. It was here that students were able to hear firsthand how Hofstra changed the election for their campaign in 2012. We heard some of the inside stories Axelrod carries with him from his time spent with the president. Students were also able to ask questions on a number of different issues, such as how he sees this election going and what type of role the Hofstra debate might play.

The next set of events I was able to attend were with former Louisiana Governor Bobby Jindal. Not only does Jindal have valuable policy making experience, but he also competed in the early stages of the Republican nomination process. One of my classes was actually able to secure a time where the class could sit down in Hofstra Hall and ask him questions while receiving a more in-depth analysis of what his past experiences were like. At his later event in the Adams Playhouse, Jindal outlined a number of concerns he had when he thought about running for present and talked about some of his experiences with health care and education policy back in Louisiana.


Other events coming up feature commentators from CNN, MSNBC, The Washington Post, and more. One other event I am pretty excited for is comedian and political analyst Larry Wilmore, who will be coming to campus this weekend. Wilmore is sure to bring a pretty unique set of views as he has formerly worked on shows such as “The Daily Show.”

Events like these are part of what makes Hofstra so special. Not only do I have the opportunity to experience what a presidential debate is like but I also get to hear from the people who have truly been there. No matter where you stand in the upcoming election, the value of hearing these stories is not lost. These lectures and discussions go a long way in building excitement for this debate, something which has certainly been growing as we inch closer!
Posted by Joseph Marrone at 7:00 AM