The day after the #HofDebate 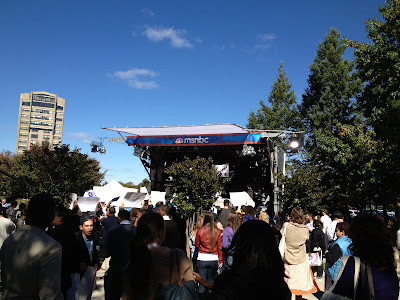 The entire debate experience at Hofstra was unbelievable.  It felt completely surreal until Monday when I had my 9 a.m. class and was forced to realize my classy Hofstra sweat pants wasn’t one of the top stylistic choices on campus that day.

The Hofstra Debate was definitely a once in a lifetime experience. Because of all the hype leading up to the debate, it was also the perfect opportunity for students to really get involved in all the politics surrounding the election. 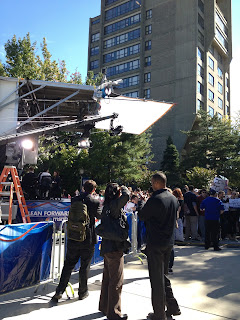 By Tuesday, the entire campus had come alive with the debate buzz. Everywhere you looked there were debate 2012 signs, reporters, students rallying, and fun activities to get involved in. The debate took over campus. It was electric!

It was incredible to experience the live shows broadcasting right here from campus and to see Hofstra on the news. There was a real sense of community and pride that came from everyone being so passionate about the debates and election.

The night’s debate watch parties united the students together to watch this historical moment unfold. It became more then just a debate: it was a taste of Hofstra’s pride.


Rumor also has it that on campus there were several candidate cardboard cutout kidnapping attempts. All of which were foiled. But, I must say, I personally wouldn’t mind eating lunch in the Student Center with a cardboard cutout of Obama and Romney.
Posted by Caitlyn Hutchison at 12:55 PM